When you ask people what language they speak in China, the majority of folks say its Chinese. In the US we seem to think that in categorizing nations the simple rule to follow is that everything is derived from its name. So in China the Chinese speak Chinese. People do that with me as well. The other day a real estate agent asked me if I spoke Pakistanian. That was a first, but I regularly experience people asking if I speak “Pakistani.” They get perturbed when I tell them that there is no language called “Pakistani.”

This makes me wonder why people here think that we can speak “English” and not “American.”

Yet people still make the mistake out of ignorance, or arrogance, in that they want to appear “worldly” so assume to go with what they think is the right reference.

Similarly that is probably why you don’t say “Allah” in Chinese since there is no language called “Chinese.”

Its what folks unfamiliar with China refer to as the language, when in fact there are many dialects the comprise what people term as “Chinese”, Mandarin being one of the generally accepted standardized dialects. Cantonese, Min Xiang, Hakka, Gan, and Wu are other dialects spoken in different regions of China. Sadly, because of the monolith perception we apply towards regions and peoples and cultures of the world, we don’t recognize the inherent diversity present.

Here’s a little video on the differences between Cantonese and Mandarin, which to foreign ears probably just sounds all the same, but thats like saying Spanish and English is all a bunch of gibberish.

On Fabricated Hadith, In Pursuit of Knowledge, and On Parental Advice Gone Wild

These dialects, however, share some things. One is their non-Abrahamic conception of the world. But whats even more fascinating is how do you talk about a Creator when the culture and the language derived from it don’t necessarily have the same concept of the Creator, Allah, or in English God.

Over the years I have had a growing fascination with Islam in China because of the fascinating turn of culture, history and politics there. I guess you might say that it started with the oft recited hadith that “a Muslim must pursue knowledge, even if its all the way in China.”

The hadith actually is not real. The Prophet never said that, but it didn’t stop my parents from using it to encourage and cultivate their attitude toward education. What they hadn’t anticipated was that it might lead me to actually follow through on this Chinese adventure.

Its this curiosity of Islam in China that I picked up from the fabricated Hadith, that I picked up “The Sage Learning of Liu Zhi: Islamic Thought in Confucian Terms” by Sachiko Murata and Weiming Tu.

The book is not for the leisurely reader, in fact, its especially academic as it specializes in a very narrow scope of discussion on Sino-Islamic interactions. However, the introduction is immensely useful at untangling some of the complexity that surrounds Islam’s encounter with China, and its unique development as a cultural phenomenon from which we Muslims in the West can learn from.

What was particularly interesting was that in China, Muslims had to function within a cultural and linguistic framework that was incredibly (if not radically) different than anywhere else. To do so they had to take Islamic concepts and translate them into Mandarin, not just from Arabic to Mandarin, but from Islam to Confucian thought, because so much of Mandarin was influenced by Confucian framework. In that way, Muslims in China brought Mandarin into the fold of Islamized languages. When thinking about this, consider Bengali, a language from South Asia spoken by a majority Hindu population and expressing ideas (born from potentially) from Hinduism, but also spoken by and used to form Islamic ideals, by millions of Muslims.

Talking about God when God Doesn’t Exist as a Concept 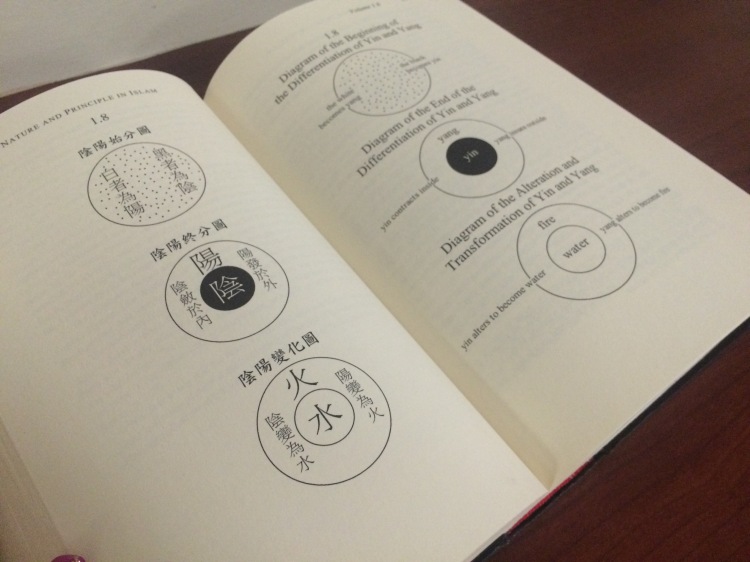 My questions about the Chinese word for Allah, is a good example of the tangle of complexity that wraps up something that is on the face quite simple. Yet identity, ethnicity, language, culture and nationality are complicated topics that we often try to simplify in the framework of modern nation states, or modernity. In a secularizing, liberal, globalized world, the existence and survival of the Muslim communities in China seem to provide an example of [things] Muslims in the West need to draw on.

Chinese Muslims faced this idea of identity very differently then say South Asian ethnicities or Farsi speaking converts to Islam in Central Asia. Sage Learning does not delve into the history of Islam in China in that sort of complexity, so if you are expecting that you will be sorely disappointed, as I was to an extent. Where it picks up is how Muslims in China had to manage the complexity of their communal existence, especially being cut off from the larger Ummah and existing in a society that was not rooted in the Abrahamic tradition, therefore, its reality and explanation of existence (creation) was greatly different, but not foreign from Islam.

I want you to dwell on this idea, a culture and society who’s entire experience was devoid of the Abrahamic concepts of reality. Just let that sink in, because its hard to escape from that reality if you are from any part of the world where Judaism, Christianity, and Islam flourish.

What made the Chinese experience distinct was that its language reflected its non-Abrahamic conception of the world. It also reflected a world without a Central Creator Being (Allah) that interacted with creation (e.g., sending down prophets and holy scripture). This is why we might find it difficult to think in terms of Mandarin, in notions of God wanting to guide his creation by setting an example through the Prophets who were on this mission to help humanity.

Look at the language of Urdu, we use many words for Allah, including the Arabic Allah. We use the word Khudha from Farsi language, or the another Arabic word, Rabh. We talk about heaven and hell, tawheed and shahadah as if they are part of the Urdu language. Yet these are Arabic words for Islamic concepts that have been internalized by the Muslim communities that speak the Urdu language. Because the language represents a diversity of people and a deep history rooted in transnational movement of people and cultures across Asia, it has a significant shared and ordered understanding of Islam. It has internalized Islam, its conception of the world, its metaphors, its stories; and like Turkish and Farsi, it can be considered an “Islamic language.”

Yet, we struggle to take Mandarin words like “Mandate from Heaven” into our English conception, however, we continuously find ourselves having to relate it to our notions of God and Heaven. When we talk about this Mandate, we always imagine that its God. But there is no Chinese central Creator Figure. So the problem faced by English translators, was one that Muslims in China faced, as did the Christian missionaries that went there.

This also has a lot to do with how do we internalize Islam, which has a lot of concepts drawn from Arab culture and society. In the West, I have seen people answer this question primarily in the example set for converts to ethnicize, to take on the appearance of Arabs and adopt Arab names. But Islam in America is no longer the domain of a majority immigrant community. The second and third generation, coupled with indigenous Muslim communities are forming the bulk of the expression of Islam in America. The further removed we become from the cultural trappings of religion, the more we need to realize the authentic principles and values of the religion within our new cultural norms. This is where I got the sense that we have a lot to learn from the Chinese Muslim experience.

In China, Muslims had to compete in the ideas marketplace, and to stay relevant they had to express their ideas to outsiders. These Chinese intellectuals, business owners, politicians, had to understand these concepts, which were based on Confucian and Toaist thought. Up until this point, the Chinese Muslim community were “immigrants” and considered outsiders, Arabs. But when Muslims began becoming embedded in Chinese society, things changed.  In this void, Liu Zhu, took center stage. He syntizied an Islamic worldview, in what we have today as The Sage Learnings of Liu Zhu, that would make sense to the predominately Confucian oriented Mandarin speakers of China during the 15th and 16th centuries.

For Muslims in China, he offered an Islamic learning through the Mandarin language, allowing them to be part of the larger Chinese community and also do Dawah to their neighbors, without becoming a closed off community. This would be critical because the Muslim communities of China would be cut off from the Ummah, as Western colonization and the Chinese response of a closed-door policy, followed by civil war and the Opium wars, made Muslims hostage to geography. Yet Muslims in China guarded the sacred character of the Arabic Quran. They did not allow a Mandarin translation of the Quran to be created for twelve centuries, but finally in the nineteenth century such a translation was produced.

I think this is a sort of model for Muslim like me who are contesting Muslim identity in the West. Syed Hossein Nasr sums up in The Study Quran, this process is important for Muslim in the West, by using English to express Islamic ideas and to weave it within the fabric of the language, is “to take a step toward transforming English into ‘an Islamic language,'” so that Muslims in the West can express their experiences through the Islamic lens back onto other Islamic cultures and societies.

It is also probably what the right wing in America fears. This sort of endeavor creates complications and complexity beyond their comprehension if, actually when, more people will speak languages besides English and express an identity not identical to their lived experiences. But when English is incorporated as a means of expressing Islamic ideas, it already is, they speak of Jihad and Sharia without needing to define it, we have achieved a significant shift in culture. In that way, language is a battle for identity, and ultimately power.

How Chinese Muslims approached this engagement and identity creation process is unique to Islamic history. How China interacts with Muslim countries today is going to be significant in how those communities respond to China’s treatment of the minority Muslims within its border. China is a big player in Pakistan, where I will be spending the next two months. It is currently plying forty-five billion dollars into construction projects, one of them being a major deep water port, Gwadar, and a highway from there, through the Himalaya’s, which goes into Western China.

As China becomes the focus of economic development and trade and geopolitics, China’s Muslim population, which is incredibly diverse as I found out, will also become part of the engagement challenges. So how would you say Allah in Mandarin? Allah. Yeh, thats about it.

Images are from websites that track Tea Party signs and stuff, links are attached to the images. Images of Sage Learning diagrams are taken by my sister on her iPhone, randomly and with no apparent desire to infringe on copyright, just to show the methodology with with Liu Zhu was presenting what is termed as “Neo-Confucian Islamic” thought.