A hike, a year in the making (and a blog post nine months later, yikes)! This adventure was originally accomplished back in 2009 by Ameechi and me. We originally were going to mountain bike the crap out of the trail. Naive were we, because neither one of us had mountain biked (like ever); and, worse, we had not hiked in like five three years. To top all of that, we got out to Devil’s Punchbowl around 11AM, under the watchful August sun, with flat tires on our bikes.

We decided nonetheless to hike the trail. But we were ill prepared for the heat, our mantra was “Green Water Tunkie!” and every time we laid eyes on that beautiful green water tank we knew we were a mile closer to going home. When we finished that hike, we had it in our minds that it was a 14 mile round trip hike. Boy were we wrong, its a 7 mile round trip hike.

For 2014, Ameechi and I had planned to hike it again. This time we were both in better shape, and we were committed to this hike, until it came time to wake up at four in the morning to get there by sunrise. We failed. On four separate occasions, throughout 2014, we slept in rather then haul out of bed. After numerous failures, we got ourselves to hike out to Devil’s Chair as our 2015 kickoff hike, with the added bonus of bringing along Middle Shaikh.

If you have 101 Hikes in Southern California: Exploring Mountains, Seashore, and Desert, then this is listed as Hike 27 (2008 printing).

I have a thing for places named after the devil, and usually its because there is some sort of diabolical aspect to the natural forces that create the space, not because I have an affinity for the devil. In a way they are stunning, but also at the same time impossible to believe as being real. They lie at the space where chaos and order coexist. For Devil’s Punchbowl that reality is manifested by two faultiness tearing apart the crust of the Earth, and turning it inside out.

Nestled in the northern San Gabriel mountains, on the eastern face, Devils Punchbowl lies at an altitude of 5000 feet, and is a mix of pine forest (it lies on the border with Angeles National Forest) and desert brush. On this particular hiking day we got to see the peaks of the Gabriels in the near distance packed with snow. 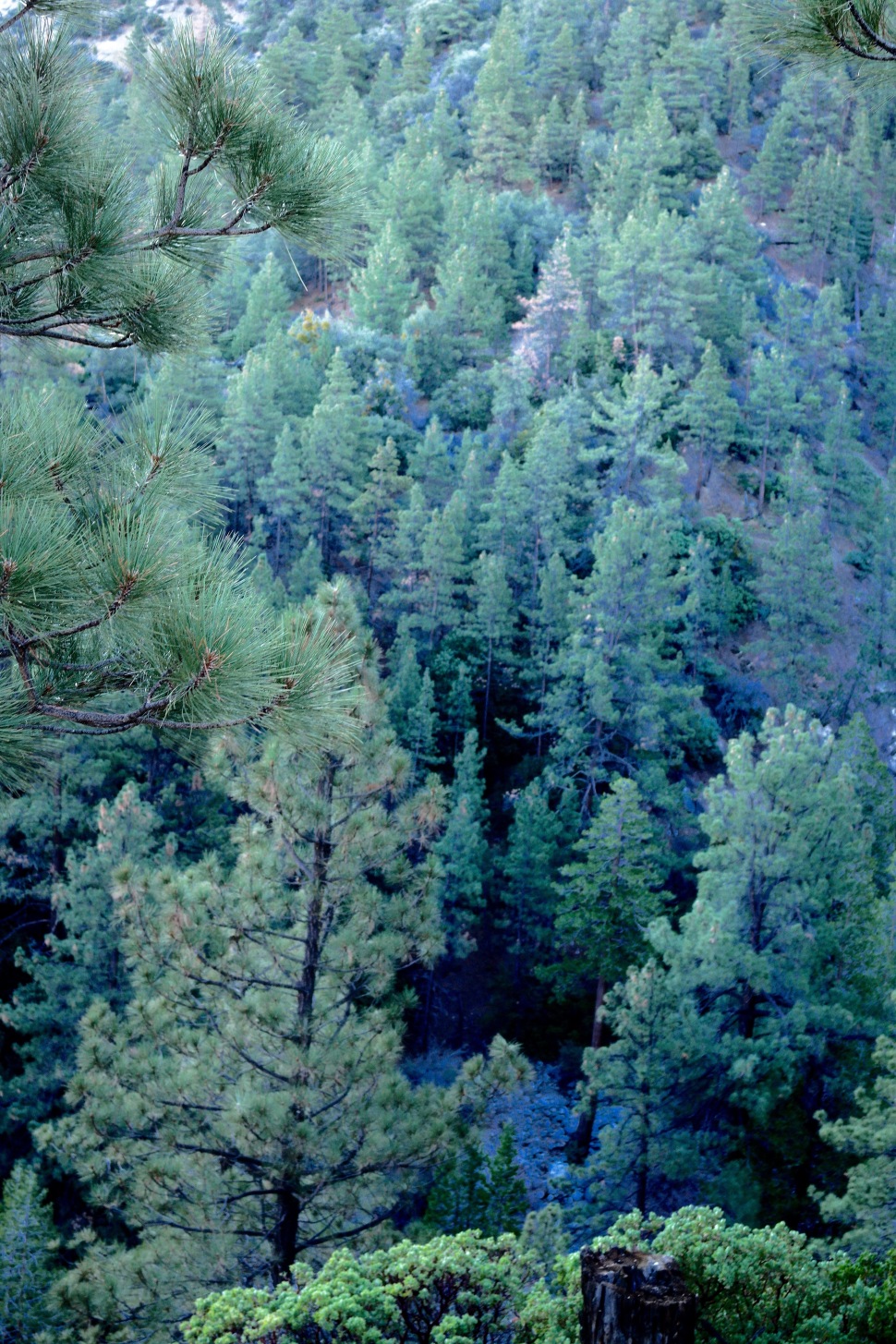 As we hiked through the pine shaded portions of the trail we got blasts of cool icy pine smelling wind channeling its way down the mountain ravines. In the sunny portions of the trail, updrafts brought up wet earthy Manzanita wood smelling warm breezes. Hard to think of this being part of the Mojave Desert, yet this too is still part of the high desert climate as it is part of the Antelope Valley. It was the perfect time to hike the trail, because the sun was not a major factor. 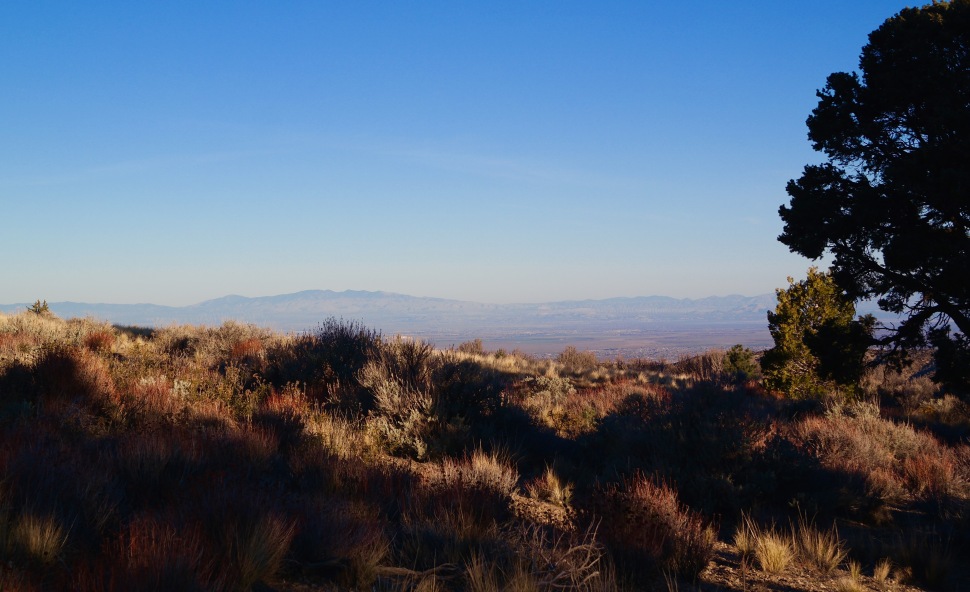 This particular hike was tens of millions of years in the making. Unlike the more spectacular painted canyons or hills you can find elsewhere, Devils Punchbowl is a conservative simple affair, with lots of monochromatic sandstone slabs, interspersed with dark green vegetation. But it is one of the more spectacular geological masterpieces located near Los Angeles, besides LA County Vasquez Rock (read about adventure here) park some fifty miles north of Devils Punchbowl.

Two faultlines have gone to work on the 300 foot chasm, which to me seems to be more like a open wound in the earth. The San Andreas and the Punchbowl fault lines have pretty much pushed upward, crumpled down, and transported horizontally large swaths of sandstones, making the highlight of the geological area the Devils Chair. It is here that you can stand near the center of this geological masterpiece in what looks like an amphitheater of various slabs of rocks. From here you can gaze at a spectacular geological forces that call into question the very ground we stand on, is it really all that stable?

There is a shorter 1 mile loop that takes you into the bowels of the canyon that forms the main Punchbowl formation. We however like to hike the longer 7 mile hike that takes you out to Devils’ Chair where you can gaze upon the frozen chaos.

Getting out to the Chair you sit in an enclosed, fenced off precipice in the middle of a view point that perches on the upper rim of the canyon complex. Here you see the sandstone chunks and slabs tipped at odd angels, bent, pulled apart, squigglied up like a child’s painting. The reason for all this chaos is that Devil’s chair sits practically astride the “crush zone” of the fault lines, and thats why I refer to the area as the Earths wound because this is where things are being done by the plates. 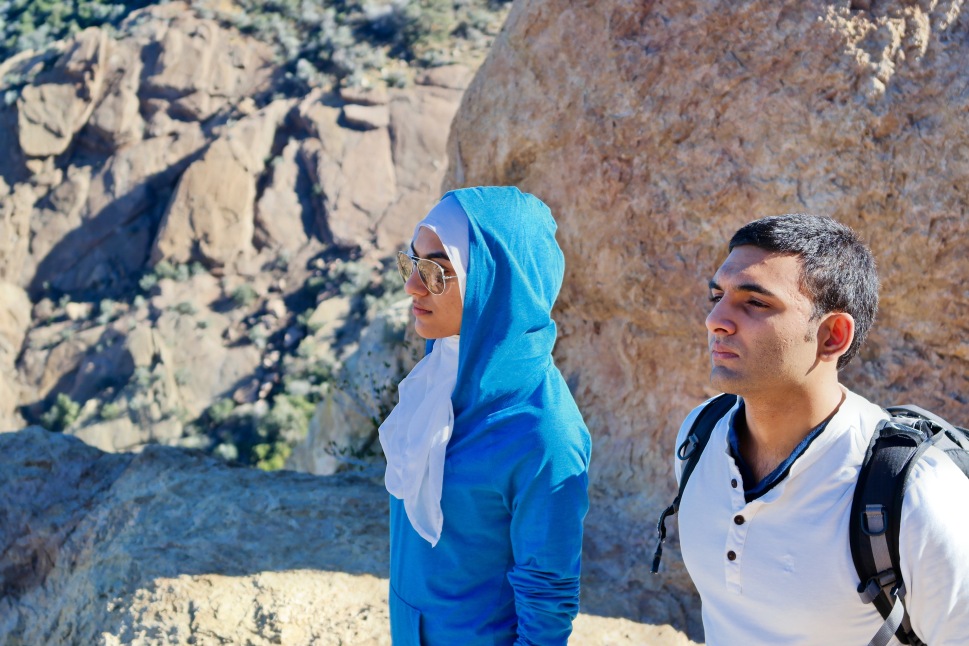 What I have a hard time about is that back in 2007 I thought I could mountain bike this trail. Holy tasbeeh I was so wrong in my assessment of the trail. Its one harrowing path with all sorts of dangerous things to trip you up with. I give props to the folks who bike this trail, but I would never consider it. The pictures of the trail deserve a whole separate post, which I will try to get to in the next nine months, hopefully sooner!