I have been busy. Not the busy with life per se, but more so with certain hobbies. They eat up my time, so I haven’t been blogging as much. I think its time to start sharing again. We (the sibs and I) picked up a new hobby, road biking, to go with the local climate and terrain. Along with it, we got a butt load of new gear.

From physical things to digital programs, the experience of getting started with road biking left me with the overwhelming reality that consumering today is just too much effort: research, product comparisons, competing considerations- all of it stemming from choice! We all agree on wanting choice, in fact we expect it, but when is choice just too much?

When it is too much, we fall back onto good old human nature, purchasing out of habit, loyalty or worse we get all tangled up in a web of indecision and buyers remorse! There is where a lot of my online time has disappeared into, and to be honest, making the decisions for this new hobby was taxing on me. In the end we relied on YouTube product reviews, die-hard sport enthusiast reviews, and we kept out of the stores, sticking to online searching to get a sense of what was out there. What I found was folks in the big-box store knew very little about the products there companies were selling and the speciality stores had exuberant prices on top of the line merch, and not so much selection for entry level noobs like us.

Reflecting on this whole process I was reminded of Sheena Iyengar’s book, The Art of Choosing, which covers her research findings on the psychology of choice

. What she suggests is that humans are wired in a way that limits our ability to process information, making the task of choice odious at best, but in its worst case, where there is too much choice, it becomes “difficult overall for people to identify what they want and how to get it.” We fell into that category when it came to our new hobby, there just were too many choices of bikes, helmets, car racks, bike storage racks, and all these other accessories.

How we arrived at the Paradox of Choice

That is one of the reasons I like hiking, it doesn’t require all that much equipment, with the exception for a sturdy desire to walk, for miles if necessary. I haven’t gone out hiking because of the heat, and now its cold. The Antelope Valley is an odd microclimate, while the rest of Southern California enjoys great mild weather, being on the backside of the San Gabriel mountain range we get extremes. I wrote about this a few times now, you sort of just learn to cope with it, because when the weather is perfect out here, its just absolutely breathtaking. The other aspect is distance, you can easily traverse sixty miles out here getting from your home to the spot you plan to hike. Along the way you see a multitude of road bikers, which is what lead us to consider it as an outdoor activity outlet. The deal breaker, though, was the discovery of the hundred and seventy miles of breathtaking paved bike path snaking its way alongside the California aqueduct (dubbed the California Bikeway)  from the western most reaches of the Valley to its most south eastern point near the man made Silverwood Lake, nestled int he San Bernardino mountains. 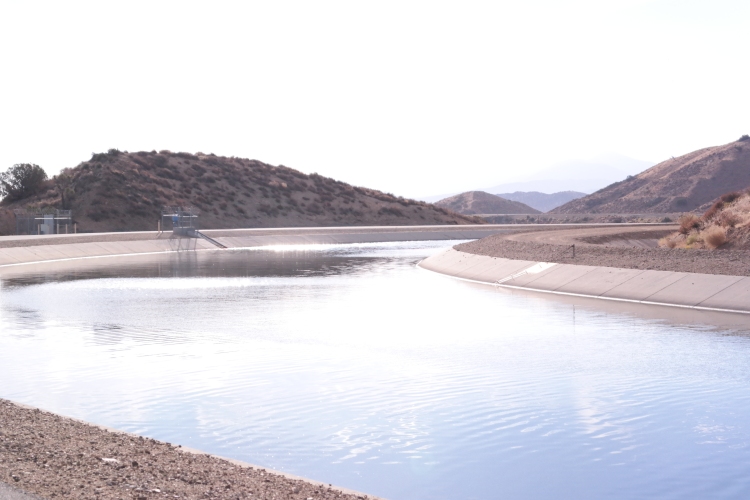 Having made up our minds, all we needed were bikes. Soon we discovered we would need some way to transport the bikes. Helmets, since we were biking up to twenty miles of bikeways, something to carry snacks, water. Where would be if we didn’t collect data on our progress, so electronics. This new “hobby” went from being exciting to a time consuming mini-project.

The first choice– mountain bikes or road bikes? We were torn. Googling it didn’t help either, because the cycling forums, websites, personal blogs were all over the place. How do you choose? Obviously price was a big factor because this was something we wanted to get into, but sinking money into the hobby just made no sense. We ended up drawing up the list of what we wanted to do, then prioritize the reality from the fantasy- we weren’t going to go careening down steep mountain sides or carrying up bikes up cliffs like Danny Macaskill (you have to watch the video!). No, we needed simple stuff for our simple reality. We were going to stick to the leisurely flat terrain of roads, pushing ourselves physically on blacktop.

Its been at least six years since I last rode a bike, so it has taken some time to get used to it. My brother, he’s ridden bikes in Boston, Paris and while he was at UCLA, so this is something he has a handle on. The sister though, she hasn’t had a bike since, middle school, maybe? Ultimately she chose the mountain bike because of its gears, it makes it easier for her to exert little effort but still get good gains while biking. 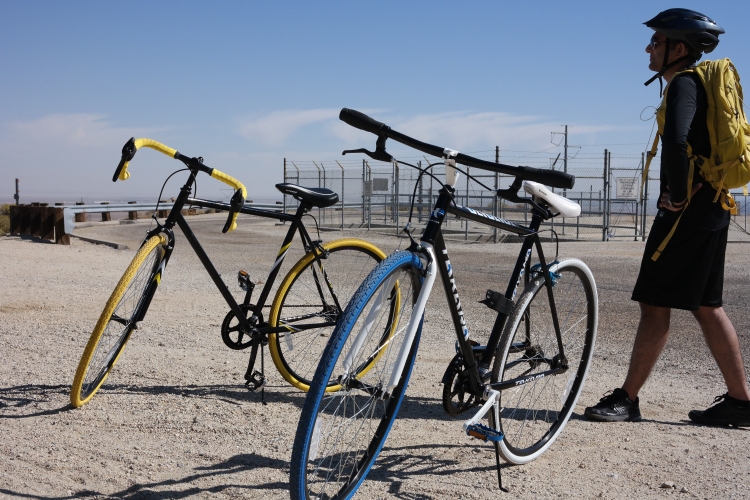 The fact that we had miles of pathways to bike before we ever planned on taking it up some dirt mountain trail was our deciding factor. I ended up getting the Takara Sugiyama

. My sister opted for the a mountain bike, getting the Women’s Granite Peak Roadmaster

. All three bikes came under $150 bucks, but you can easily spend a thousand dollars on just one bike if you wanted to. We also purchased Schwinn Bicycle helmets

. The crazy thing was, we all wanted Schwinns, but they were priced comparatively higher then the bikes we ended up getting. Maybe if this sticks, we will considering upping our gear.

Our first ride was hard, for me it was largely the bike seat that came with the Takara Sugiyama, it was like my butt was a open wound the entire ten miles we rode it that first day. A week later as we prepped for our second ride, my butt felt the pain of the seat long before we even got up to the bikeway. It definitely is something that takes getting used to, even after clocking in thirty miles, I feel like there is a long way to go before I have a steel butt (and balls of steel, oh my that hurts beyond measure, mile after mile, a constant reminder and hence an open wound).  One of the apps we are using to track the rides is Strava.

, however, the watch strap is falling apart and it doesn’t take biking into account, so it would mess up my hike and run stats. However, Strava is a pretty awesome tool, its powerful in that it can track runs as well, and you can link it to a heart rate monitor, but you have to purchase a premium monthly service along with the Strava compatible monitors (bummer!). 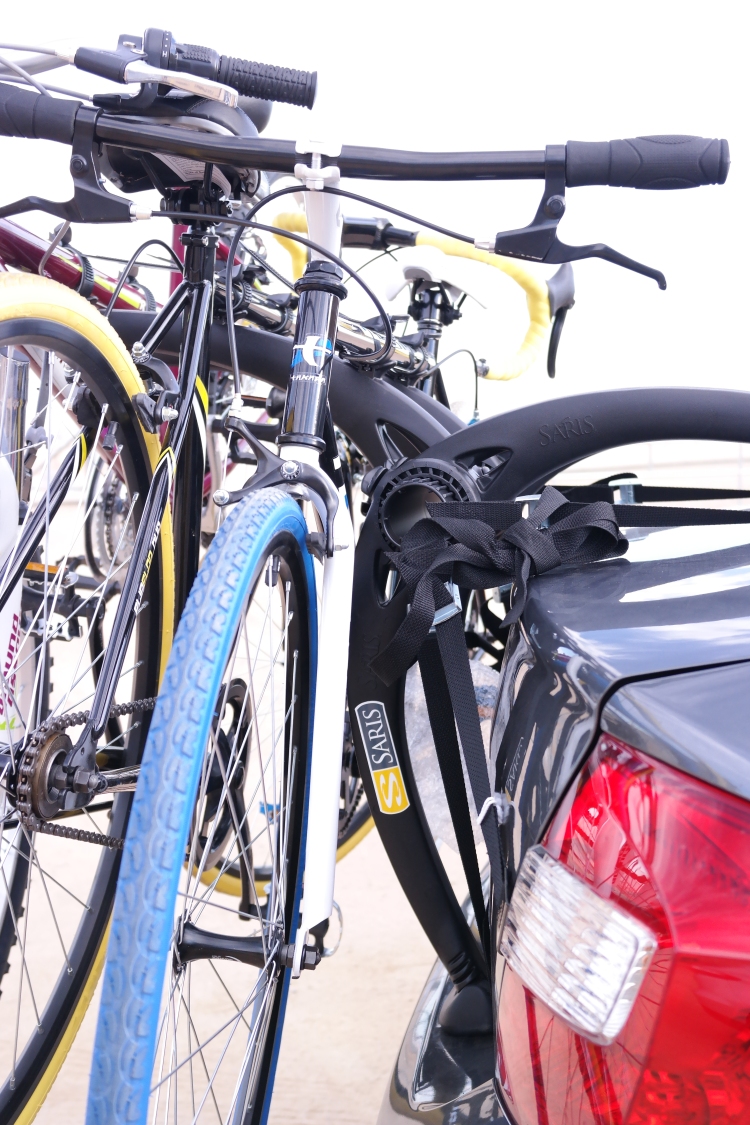 because it looked pretty cool with its modern curved arc-ed design, like a sculpture almost. To me it was iconic, and that meant it made a statement. I like things that combine design with functionality, the Saris rack does precisely that. Now we just need to get something to store the bikes in our garage, our most pressing need is space saving, as well as being function in our crowded garage- we devoted an entire car space to a home gym! I am leaning toward Racor Pro Gravity Freestanding Bike Stand

, however, I haven’t don all that much research on it. Though the novelty attracts me to this pulley hoist contraption at Costco. Could definitely use some feedback!

All I can say is that the local UPS delivery guy knows us on a first name basis.

All my Photography is under a Creative Commons Attribution-NonCommercial-ShareAlike 4.0 International License.

3 thoughts on “Removing the Training Wheels on the New Hobby”