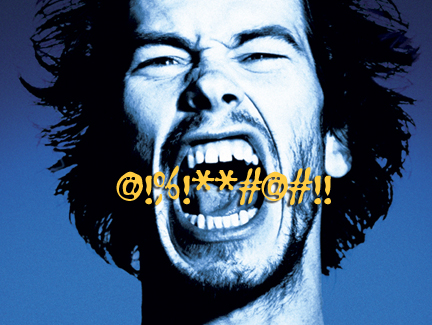 “You know that m-BLEEP. He can’t BLEEP, BLEEP, BLEEEEEEEEP”- you ever been in one of those conversations?  Yeh, I admit, I get angry and I use curse words.  My vocabularly is pretty decent so I should be able to exchange out those words for things like “poopy fart” or “smacktacular” or “cool beans”.  The thing is words matter.  The way our vocabulary functions says a lot about who we are as individuals and also as a collective society.  Words were so important in the time of the Prophet SAW that when Omar RA heard the Quran he became Muslim.  He heard the words of the Quran, like so many others, that it compelled him to believe.  That hasn’t changed today.  Our language establishes boundaries and barriars to access.  But outside of a societal norm, I learned that our words and language are so critical to our spirituality that our actions, such as fasting, can be  nullified if we do not appropriately observe restraint.

In a hadith narrated by Abu Hurairah (RA) that the Prophet (SAW) said “When any of you is observing Saum (fasting) on a day, he should neither indulge in obscene language nor should he raise their voice; and if anyone reviles him or tries to qurarrel with him he should say: “I am observing fast.” (Bukhari and Muslim)

We learn that fasting is not just about refraining from food, drink and sex, but also we are prohibited from improper language.  Meaning we shouldnt be abusive towards others, we should not talk about obscene things or acts, nor should we use vile language, to talk idely or foolishly, to partake in gossip or backbitting.  Plus from this second hadith we understand that the Prophet SAW felt that if we couldn’t refrain from such behavior, then there was no purpose to our fasting: “If one does not eschew lies and false conduct, Allah has no need that he should abstain from his food and his drink.” (Bukhari)

Without getting all weird on everyone, I want to focus on why it is important to watch what we say.  If we all accept the idea that we are what we eat, then it applies to other facets of our lives.  We are who the people around us make us out to be.  What we spend our time listening to influences us.  What we place on a pedestal defines what we strive for in our lives.  The same is true for the things that we say and spend our time thinking about.  Imam Al-Jawziyya says that there are three types of hearts- healthy, sick and dead.  The dead heart is one that is incapable of self control.  The dead heart is ignorant of it self and those around it.  It is drunk in its own fancies, impulses and fleeting pleasures.  I would say a dead heart is much like a heart stuck on nihilism and anarchy, but I may be going to far.

Allah says in the Quran “The day on which neither wealth nor sons will be of any use, except for whoever brings to Allah a sound heart.” (26: 88-89)- a sick and healthy heart are ones that have the ability to be considered a “sound heart”.    A sick heart is one that has life in it along with sickness.  The one that dominates this heart is where this person will go, fleeting from goodness to evil.  It is a heart in need of balance- for while it loves God, it also pursues its pleasures and cravings for lust.  This heart listens to two callers- Allah on one side and the whisperings of the devil on the other.  For those struggling against this balance, there is no better way to begin to control oneself then to begin controlling ones tongue and ones thoughts.  This is not about being politically correct, this is much more than that.  The action of self control is to understand the freedom that we all have but to apply responsibilty toward that freedom.  So for the rest of this Ramadan excercise self restraint and control your tongue and thoughts.