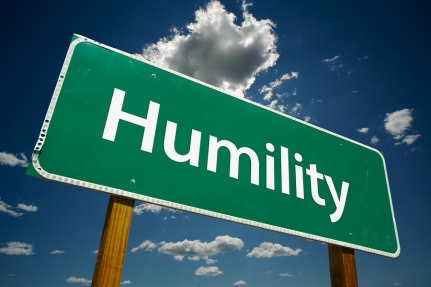 Growing up I remember reading verses from the Quran that referred to “turning to your Lord in humility” and “those who humble themselves in prayer.”  I heard lectures, sermons and got lots of parental advice on being humble.  Aesops fable about the Two ducks and the Tortoise or the Horse and the Ass helped drive the concept of humility hom.  A simple life is a humble life was a maxim I could relate to.

Up until now I wasn’t sure what “humility” felt like, but after a semester of law school, the understanding I thought I had, seems foreign- and fake- to me.  I think like most people my age there is a large dose of self righteousness, self importance, unbridled sense of privilege and entitlement that is unaccounted for.  We live in a world of instant gratification and when we don’t get the immediate text message response, or the fast internet access or the whatever, we feel as though we live in a “third world country.”  I am certainly guilty of that.  I feel like AT&T has the worst false advertisement campaign out there- largest wireless network my rear hair covered brown butt.  (yes cringe because thats how I feel about AT&T)  Our live styles make the concept of humility foreign, but worse, being humble is portrayed as a weakness a sure way of not making it in the world today.  Neither of those are an excuse, nor should they be accepted as norms, because humility is not a concept that is at odds with the world today, in fact, its the loss of humility that makes modern life such a drudge- we’re so full of ourselves that we don’t understand the fall out that results from our behavior.

Did you know that the Latin translation for “humility” incorporates the meaning “from the Earth” and “low” or “grounded.”  Which is really interesting because the Latin word presents the Quranic Arabic concept really well.  When you find God talking about “humility” most likely its in relation to “prayer” and for Muslims that concept of prayer incorporates the physical as well as the spiritual.  The height of prayer is the moment where a Muslim is in prostration- their forehead lowered to the ground touching the dirt- “grounded”, “low” and “earth.”

But the problem is that its all fine and dandy that we get the theoretical presentation of “humility” but like I mentioned earlier what does HUMILITY feel like, what does it mean to be “humble”- because I don’t think we can talk or appreciate the idea without truly feeling IT.  What is it?   Is there a way to experience humility?  How do I know that I am turning to God in humility?

I have all these things, all these material and psychological comforts that insulate me and from which I derive happiness and self worth, whether I mean to or not.  The question is what if it all disappeared, is that a means of understanding what it means to be humble?  To be in ones shoes and not your own is probably the best way to put aside your preconceived notions of the world, becoming humbled by the experience.  The concept becomes a verb- to be humbled, is that feeling humility when in fact we spend our daily lives doing our thing and not reflecting on how other people might live.

I think that encapsulates the idea of the intrinsic nature of how you see yourself and the concept of humility but it doesn’t necessarily present the feeling I am talking about because its so fleeting.  Once we are done reflecting on others- if we do that all- the humbleness disappears because we engage once again with ourselves.  The reality is that the more you see yourself distanced from a sense of loss the further away you are from feeling that vulnerability and in turn humility.  How does one realistically maintain that though?

Catholicism defines humility, as presented by St. Barnard as “”A virtue by which a man knowing himself as he truly is, abases himself.”  The image of Jesus, in Christian perspective the son of God, washing the feet of his disciples.  The concept is not limited to Christianity, in all the worlds religions and philosophical thoughts, humility is viewed as a central virtue.  Mahatma Ghandi said that you couldn’t sustain truth without humility, without humility, Ghandi believed, you have truth in the form of an arrogant caricature.

Which then informs my earlier question about what does humility feel like.  We have a concept central in Islam and yet we have a lifestyle, many American Muslims, filled with privilege and entitlement.  The cruel tension results in what I would term one’s “false sense of humility”- this idea of behaving humble, acting humble by self deprecating one’s skills, wealth, talents, gifts, intellect.  This idea of humility seems so one dimensional when you consider Jesus washing the feet of his disciples or the nobility of truth being enshrouded by the virtue of humility, or more importantly God asking Muslims in the Quran “Has not the time arrived for the believers, that their hearts in all humility, should engage in the remembrance of Allah and of the Truth which has been revealed to them.” (Al-Hadid 57:16)  Are we just pretending to be humble?  Where is the distinction between imitating what we believe is the feeling and quality of humbleness with the essence and true reality of it- being sincerely humble?

In my short life I believe that our unfortunate circumstances present the possibility of understanding the concept of humility its its fullest.  As humans we are creatures of experience, often times incapable of comprehending complex notions like humility until we get the opportunity to come face to face with it.  Being able to understand the feeling of humility then is a result of not only knowing the concept, but also experience- a cognitive interaction of concept and practice.

To that end I would say that I am experiencing that elusive concept of humility first hand.  Its been a while since my last post because I had to hunker don and figure out how to process my feelings of vulnerability and address some self doubts that arose after I got my first semester grades.  Law school is my humble pie- while it tastes bitter, I am learning a lot about myself and my relationship with God.  With one semester down I find myself reflecting on how much I thought I knew about about myself but truly didn’t comprehend until now.  So I am going to put together some thoughts on how I am using my experience of extreme vulnerability for the long run to keep up humility, but until then please share your thoughts.

3 thoughts on “Two Ducks and a Tortoise: Stupid Humble Pie, You Don’t Taste so Sweet After All”